What inspired you to become a photographer? “I guess I’ve always been interested in 2D art. It started early with an enormous interest for comic books – which motivated me to draw. Years later, I borrowed a camera from my mother. I clearly remember my first “photo safari” at the age of 10 or 11, carefully using a 24 exposure film cartridge, photographing our dog playing in the snow. It was great fun and very exciting. Since then I’ve always had a camera close to me.”

Tell us about your gear- “My most important equipment are my eyes. Then give me any light-proof box with a lens. I don’t have any interest in a camera’s technical functions, but as long as it captures what I am observing, I’m good to go. I’ll run away in panic from any conversation including words like “aperture” or “white balance”. My gear is Canon and I tend to use wide-angle and normal lens (fixed optics, no zoom) rather than a telephoto lens.”

How long have you been a professional photographer? “I started as a freelance photojournalist in the early 90’s, working with local newspapers and magazines. I started my company, POHphoto, in 2007.

I prefer taking photographs of people. When I first became serious about photography I worked for music medias, photographing rock stars on stage and backstage. For years, I attended concerts for live shots – that’s a challenge. I loved it then and I love it now. Today I focus more on moviemakers; directors, actors etc. I arrive at the designated location with the reporter or whoever is doing the interview – I do my best to photograph the subject, him or her within minutes after the interview is done, before they have to run to their next appointment. The more “busy” the subject, the more creative power I feel. I also do portraits, at whatever location is thrown at me. I don’t arrange my locations; I love making the most out of any given situation.

Many of my photos have been used for posters, promo shots, CD covers and booklets. Webzines tend to use quite a few of my photos for articles, both here in Norway and abroad.”

Have you done any studio work? “No, I have rarely been in one and that defines me as a photographer. From time to time I’ll rig a provisory studio when I need it. I love the challenge of using natural/unarranged surroundings as the location.”

On the set of Trolljegeren. (The Troll Hunter) Otto Jespersen as Hans the trollhunter. This was a memorable event for Per, because the movie turned into such a success for Norway. 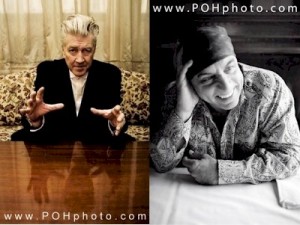 Who has been your most interesting subject? “Oh that has to be those I’ve met,  when I didn’t bring a proper camera! All those missed opportunities. I’ve found myself in a room with rock stars like Alice Cooper, David Lee Roth, Mötley Crüe and Deep Purple members, doing interviews with nothing but a compact camera for snapshots… I wish I’ve had planned a proper photo session with those guys.  I had a scheduled session with Steven Van Zandt not to long ago- he really wanted to share his experiences. My photo session with David Lynch was just great. Twin Peaks made a lasting impression on me as a kid.”

Per moved from Oslo last year to a small town in Northern Norway, where he developed an affection for landscapes.

Photography is a form of art. Tell us about the most artistic photograph you have ever taken. “I really can’t pick one. I’ve had a few travels where I’ve felt very inspired artistically – where I’ve been abroad on my own, my camera was my only companion and where I’ve tried to interpret a city artistically … Beijing, Istanbul, NYC, Sidney, Venice … When I’ve had art exhibitions, most of the works I’ve picked has been from travels like those.”

Are you working on any projects, that you would like to share with us? “I plan to have more exhibitions in the near future. I’ve found the perfect location to start my own gallery. I also want to go back to doing more act photography (from my bachelor days) for an art project. I am going to need quite a few naked bodies soon, preferably young women. I am quite sure my wife won’t mind; she’s an artist too. Kaja is both my worst critic and my favorite muse. Whatever creative dream I have, she lets me go mad and she keeps me sane at the same time.”

Do you have any advice for aspiring or student photographers? “Take at least 500 photos each week. Don’t ask your friends what they think about your work, ask someone who doesn’t know you very well. In order to grow as an artist, you need objectivity.”

Per Olav Heimstad- To see more of his work, please visit- POH PHOTO

In Production- To Inspire and Encourage Aspiring Writers, Actors, Photographers and Indie Filmmakers, with a Series of In-Depth Interviews and Articles.